How to Port RT-Thread Nano to RISC-V?

This article describes how to “port” RT-Thread Nano to the RISC-V architecture, using the Eclipse IDE, GCC toolchain, and a basic project for the Gigadevice GD32V103 MCU.**

RT-Thread was born in 2006, it is an open-source, neutral, and community-based real-time operating system (RTOS). RT-Thread has a Standard version and Nano version.

The main steps for porting Nano are as follows:

Create a basic bare-metal project in Eclipse such as a blinking LED sample code.

Before we can port the RT-Thread Nano, we need to create a working bare metal project. As a sample, this article uses the blinking LED program based on GD32V103. The main routine of the program is as follows:

In our program, the system initialization and blinking LED function are mainly done, and once the downloader is compiled, you can see that the LED on the development board is flashing. You can complete a similar bare-metal project using the chip you need.

Create a new rtthread folder under the Eclipse project and add the following folders and files to the folder: 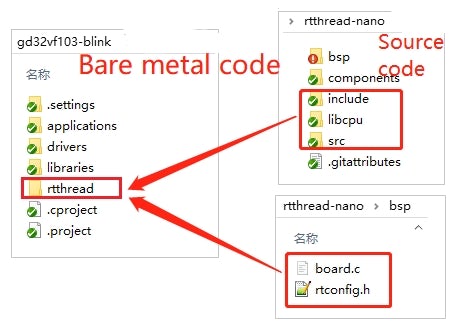 Reopen the Eclipse workspace, import the project, and rtthread folder is loaded into the project:

Right-click on the project, click Properties into the interface shown in the image below, click C/C++ Build -> Settings, respectively add the assembler and C header path: add the path to the location of the rtconfig.h header file, add the header file path under the include folder. Then click C/C++ General -> Path and Symbols, add the corresponding header file, and finally click on the Apply button. 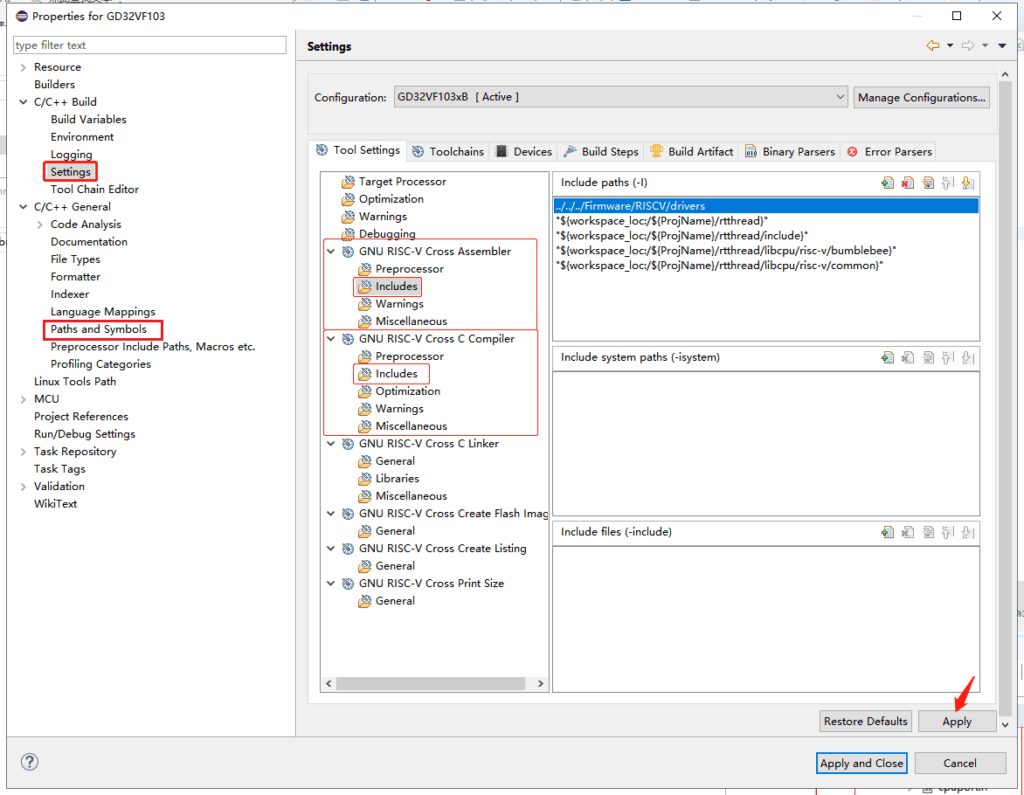 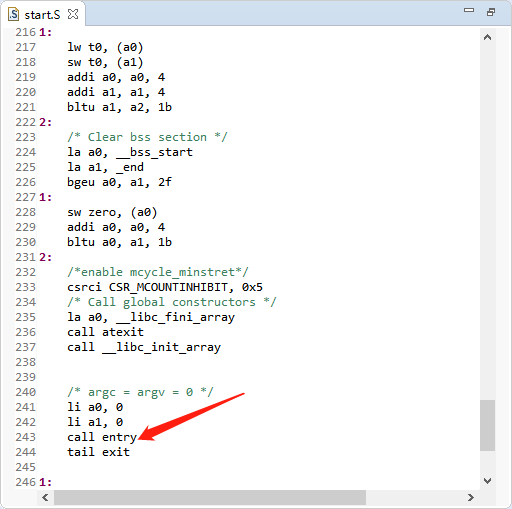 The System Clock Configuration (which provides a working clock for the MCU core and peripherals) and OS Tick Configuration (a heartbeat for the operating system) is required in board.c file.

The configuration sample is shown in the following image with riscv_clock_init() configuring the system clock, and ostick_config() the system tick. 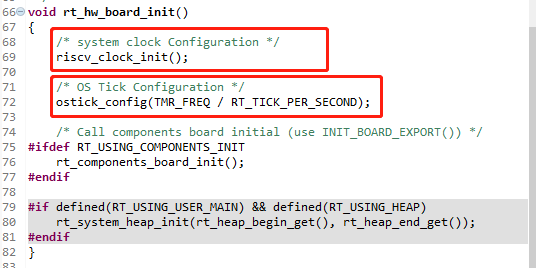 riscv_clock_init() configures the system clock as shown below:

OS Tick is implemented using a hardware timer, requiring the user to implement the interrupt service routine eclic_mtip_handler() of the hardware timer in board.c, and call RT-Thread rt_tick_increase().

Because the eclic_mtip_handler() interrupt service routine is reimplemented by the user in board.c and call an OS/system tick, the pre-defined eclic_mtip_handler needs to be removed to avoid duplicate definitions at compile time. If the project compiles successfully with no errors, then no further modifications are required.

Enabling the system heap allows you to use dynamic memory functions such as the API that uses rt_malloc, rt_free, and various other functions to dynamically create objects. If you need to use the system memory heap functionality, you can turn on the macro definition of RT_USING_HEAP, where the memory heap initialization function rt_system_heap_init() will be called, as follows: 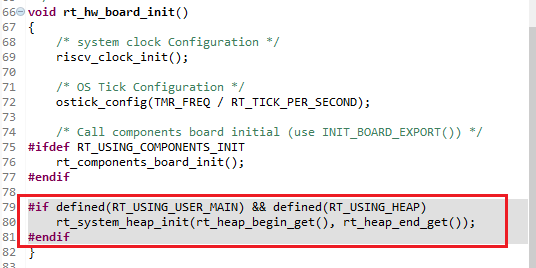 Initializing the memory heap requires the heap’s start and end addresses. The size of the array can be changed manually, as follows:

Note: When the heap dynamic memory function is turned on, the heap default value is small and needs to be changed when used, otherwise there may be a failure to request memory or create threads, here is the modification method:

You can directly modify the size of the RT_HEAP_SIZE defined in the array, at least more than the sum of each dynamically requested memory size, but less than the total chip RAM size.

Once the RT-Thread Nano is ported to RISC-V, you can start writing your first application code. At this point, the main() function is transformed into a thread in the RT-Thread operating system, and our on-board blinking LED sample can run on RISC-V systems after some modifications:

After the compiled code is downloaded to the chip, you should see the RT-Thread-based program running and the LED blinking. Note: When RT-Thread is added, the main() function in the bare metal automatically becomes the entry function of the main thread in the RT-Thread system. Because threads should not always monopolize the CPU, when using while(1) in main() you should add rt_thread_mdelay() function to your code to give CPU time to other threads.

You can configure the corresponding functionality as you need to turn the macro definition in rtconfig.h file on or off as follows:

RT-Thread Nano does not enable the macro RT_USING_HEAP by default, so only the static creation of tasks and semaphores is supported. To create objects dynamically, you need to turn on the RT_USING_HEAP macro definition in rtconfig.h file. Hello, thanks for information .
How to Port RT-Thread Nano to stm32l433 or stm32f103ze?i'm using stm32cubeide (eclipse base) and gcc toolchain