What is RT-Thread Nano Version?

RT-Thread has standard version and Nano version, the standard version consisting of kernel layer, components and service layer, and IoT framework layer. The Nano version with a very small size and refined hard real-time kernel, which is very suited for the resource-constrained micro controller unit (MCU) system. This article would go into detail about the Nano version of RT-Thread.

RT-Thread Nano is tailored from RT-Thread standard version, contains only the minimal core set of features. Nano architecture is shown as follow: 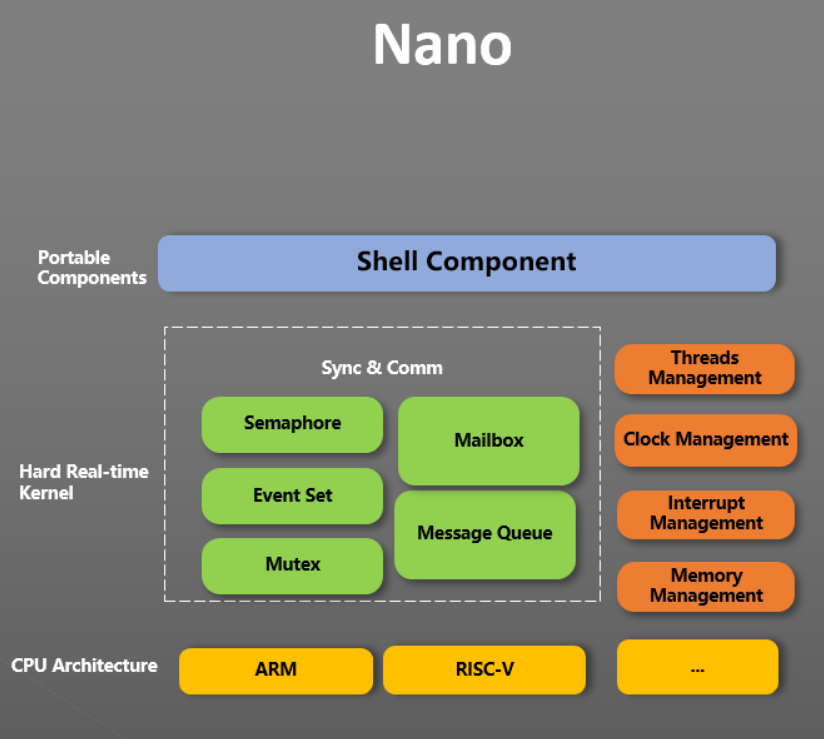 Different from the standard version, Nano doesn’t have Scons buidling system, and no Kconfig and Env configuration tools, even some device frameworks and components that are meaningful to the standard version have been removed from Nano version. Nano is just a kernel.

Benefit from the minimalist nature of Nano, it is quite easy to port Nano to a specific platform. By adding Nano source files to the project, 90% of the porting efforts are done. And Commercial IDEs such as Keil MDK and Cube MX even integrated the Nano packages that can be added to project with a single click.

Easy to tailor: Nano’s config file is rtconfig.h, it lists all the macros of the kernel, some of it has been turned off, you could turn it on when you need.

Easy to add FinSH: FinSH component doesn’t depend on the device framework, so it is easy to port to the Nano and require only two functions to implement.

Documents: RT-Thread offers developers with a set of documents that can be found on RT-Thread Github, and you are welcome to request the documents from RT-Thread official Twitter.

RT-Thread Nano follows Apache License version 2.0. All the real-time operating system kernel and open source components can be used free of charge for commercial products, there is no potential commercial risk and you will not being request to publish application source.

Follower
0
Views
505
Follow the question Answer the question Share Save Report
0 Answer
There is no answer, come and add the answer